On January 26 each year, our family and the Roman Catholic Church celebrates the feast day of Blessed Michał Kozal (1893-1943), bishop, minister to those imprisoned, and one of the many Polish martyrs who perished during the Second World War.  Beatified by Blessed Pope John Paul II on June 14, 1987, Michał stood for love and faith in the face of tyranny and persecution.  He earned the martyr's crown via his tireless preaching of the Gospel, even while imprisoned in a concentration camp. 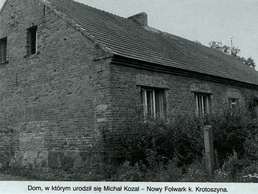 Born in the small Polish village of Nowy Folwark, Michał was the member of a very large family.  Due to its size, the family was quite poor, yet they managed to survive under these difficult circumstances.  They were sustained on faith through the example and leadership of John and Marianna, Michal’s devout parents.  While not all the children were sent for education, Michał demonstrated an academic aptitude, serious nature, and fondness of everything sacred, and as such, was sent first to elementary school and then to high school. 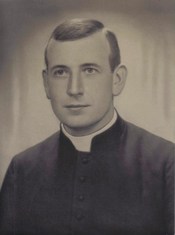 After graduating in 1914, Michał entered the seminary Leonium Poznan, and was ordained in 1918, despite his studies having been disrupted by World War I.  He served well in various assignments, moving from town to town in rural Poland and demonstrating both zeal for the Lord and dedication to the Church.  Simultaneously, Michał continued his theological studies and was recognized in 1922 via appointment as the Prefect of the Catholic School of Humanities in Bydgoszcz.  He was later named the director and spiritual father of the Major Seminary of Gniezno.  So successful in his tasks, Michał was appointed the rector of the seminary in 1929, despite the fact that he was the only teacher there who had not yet finished his academic degree. 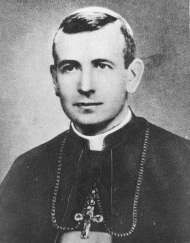 Blessed Michał labored for a decade at the seminary, leading his charges by prudent and disciplined example.  In 1939, Pope Pius XII appointed him auxiliary Bishop of Włocławek, and he was installed in the Cathedral of the city on August 13.  Only two weeks later, Poland was invaded by Nazi troops, and Bishop Kozal found his position required him to allay the fears of his parishioners, bringing comfort in a time of horror and devastation.  The Polish authorities urged the Bishop to leave the city and reside in a safer location, but he felt strongly that his place was with his people, and he remained in Włocławek to administer the parish and preach the Gospel.

Only twenty-two months following his appointment, the German troops took Włocławek and systematically began dismantling the Church as they had in other cities.  Catholic publications were suppressed, buildings belonging to the churches and religious institutions were seized, and the clergy were arrested and detained.  Despite the terror and persecution, Bishop Kozal protested the seizures and arrests zealously, but in vain.  He was ordered to present himself to the Gestapo, who ordered him to deliver his sermons only in German.  He refused, given that the vast majority of his parishioners did not speak German. 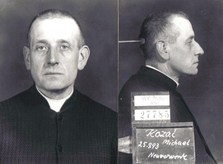 On November 7, 1939, Bishop Kozal was arrested, along with the other priests still remaining in the city, and imprisoned in the city jail.  He was placed in solitary confinement once it became clear that the others were looking to him for leadership, spiritual counsel, and direction.  Shortly thereafter, the Gestapo began torturing him as an example for the others.

Three months later in January 1940, Bishop Kozal was transferred with the remaining priests and seminarians to a more comfortable location.  There, kept under house arrest, he began to reorganize the diocese and seminary to promote the faith and provide hope to those without hope.  Each day from the small window of his room, he could see the crowds of deportees and realized that he, too, would suffer that fate.  In that moment, he offered his life to God for the salvation of the Church and for the sufferers of Poland. 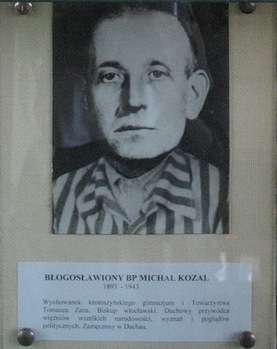 Despite the efforts of the Holy See to save them, on April 25, 1941, Bishop Kozal, seven priests, and a deacon were transferred to the concentration camp of Inowrocław.  The other priests and seminarians had been deported earlier to several other camps, the idea being that they should not all remain together.  Arriving at Inowrocław, Bishop Kozal’s tortures began anew, with injuries resulting to both his legs and his left ear.  Only three weeks later, the group was transferred to Dachau Concentration Camp.  Bishop Kozal was given prisoner number 24544 and continued to suffer daily torture.  Nonetheless, he also continued to preach the Gospel and lift the spirits of the imprisoned, regardless of faith, with all his remaining strength.  Bishop Kozal contracted typhus, and was taken to a medical ward.  It is there on January 26, 1943, that he was murdered with a lethal injection of poison. 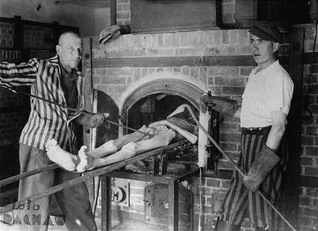 Blessed Bishop Kozal’s body was incinerated at the crematorium at Dachau Concentration Camp on January 30, 1941.  A stone memorial at the cathedral of Włocławek commemorates his martyrdom, as well as that of 220 other priests of the Włocławek diocese, who died in Dachau.

Inspired by the life and courageous living of the Gospel demonstrated by Blessed Michał Kozal, today we pray for courage to face the difficulties—both large and small—in our lives. 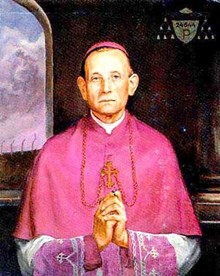 June 2019:  Important News Regarding the Church of Saint John the Baptist In Krotoszyn, Poland, the Parish Church and Spiritual Home of Blessed Michał Kozal during His Early Years. 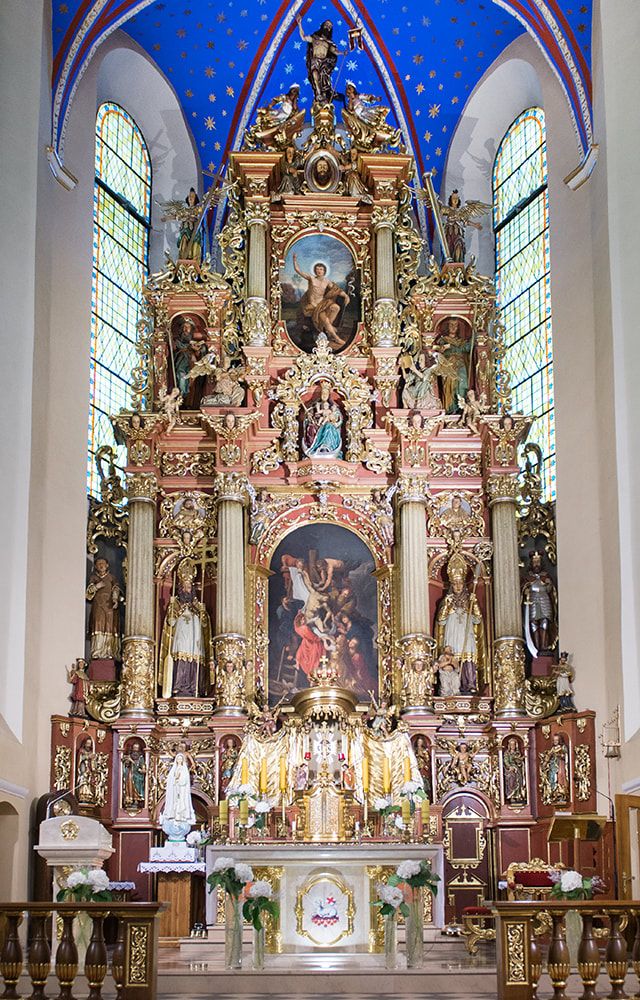 The Parish Church of Saint John the Baptist in Krotoszyn, Poland, was the spiritual home of Michał Kozal.  It was in this church where Michał was baptized, received his first holy communion, and chose to be confirmed in his Christian faith.  This spiritual home, this community of faith, fostered Michał Kozal’s desire to receive the Sacrament of Holy Orders.  His early life at Saint John the Baptist Church led to his future ordination as priest, his consecration as bishop, his acceptance of martyrdom in Dachau concentration camp, and his beatification by Pope John Paul II in June 1987.

This month (June 2019) by decree of Pope Francis, Saint John the Baptist Church in Krotoszyn will be granted the title of Basilica.  This is a very special honor for the church that was so instrumental in Blessed Michał Kozal’s life.  Accompanying Pope Francis’s decree, is the necessity to translate a relic of Blessed Michał to a reliquary within the newly dedicated Basilica.  Since Bishop Kozal’s body was burned in the Dachau crematorium and his ashes spread in a local field, the relic of Blessed Michał Kozal that will be transferred to the Basilica of Saint John the Baptist is a portion of his cassock.  This relic will be transferred from the Diocese of Wloclawek to city of Krotoszyn later this month. 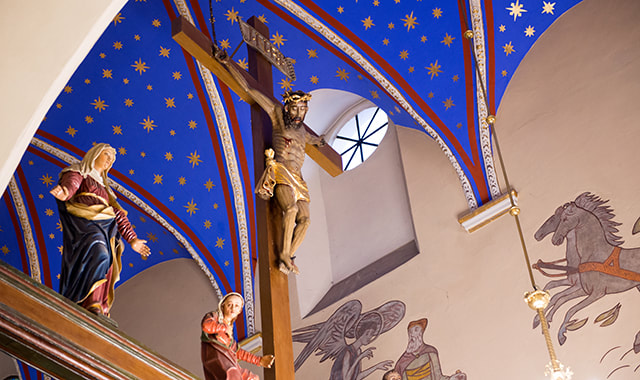 ​In order to honor the memory of our dear cousin Blessed Bishop Michał Kozal and keep the story of his martyrdom during World War II alive, the Kozal family in the United States has been asked to assist in the cost of the translation to and installment of his relic in the Basilica of Saint John the Baptist.  Similar efforts are being made by the Kozal family in Poland at this time.  For this reason we turn to our family, friends, acquaintances, and fellow sisters and brothers in the faith to help us with this memorial project.

I will be traveling with four close friends (Nicholas Palmer, Jean MacDonald, Mary Hellenbrand, and Carmen L. Nochera) to Poland on June 26, 2019.  We will celebrate a special jubilee Mass at the Basilica of Saint John the Baptist in Krotoszyn on July 5, where will present our donation for this memorial and place flowers at the altar dedicated to Blessed Michał Kozal.  If telling the story of a Christian martyr of the Holocaust is important to you, if you share a love for those who give their lives for a greater cause, or if you value the contributions of Polish people around the world, please help us with a donation.  You can safely make your donation online by clicking on the link below to our GoFundMe page:

For more information on the life of Bishop Kozal, please feel free to visit this additional site dedicated to Blessed Bishop Michał Kozal.